As they near the entered the final stretch of their 32 date North American Tour, metal-core heavyweights August Burns Red headed to Canada for 3 sold out shows. Screams Media made our way to Ottawa's Bronson Centre to cover the stacked lineup that also featured Fit For A King, Miss May I, and Crystal Lake.

Having showed up to the venue roughly 20 minutes before the main doors opened, I was met with a lineup that wrapped around the block. The doors opened just after 6 p.m, and we were met by venue security who directed us down a short set of stairs. From there, we were lead through a doorway into the building's Mac Hall, where the bands' merchandise and the coat check area were set up.

Following a lengthy misunderstanding regarding the location of my media pass, I made it past the ticket area just in time to find out I missed the Crystal Lake set. I advanced into the next set of hallways that lead into the main foyer of the building. A large bar area was set up just outside the doors to the Bronson Centre Theatre - the location of the event that night - and would see plenty of action between sets.

I then made my way through a set of doors into the main theatre. The doors from the foyer lead into the back of the room where the sound booth is. Inside there was 4 sections of seating - 1 along each side wall, one down the middle, and a balcony overlooking the stage. The main floor seating was divided by an aisle on each side that lead down towards the orchestra pit/stage. After manoeuvring through the packed aisles, I was finally able to reach the front.

Not long after, the lights dimmed and the group of photographers filed in to the photo pit, flashing their media passes to the security. Crammed between the stage and the barrier, we were presented with a very up-close and intimate perspective as the stage lit up. Miss May I came one by one onto the stage much to the delight of the crowd.

With a previous Miss May I show under my belt and years of listening to their music – stemming from the release of their first album Apologies Are for the Weak – I was dying to see them again. They started their set off with the track "Swallow Your Teeth" off their 2016 release Shadows Inside. This was the perfect way to kick it off, not one of their fastest songs so it served as a good introduction to anyone new to their music. 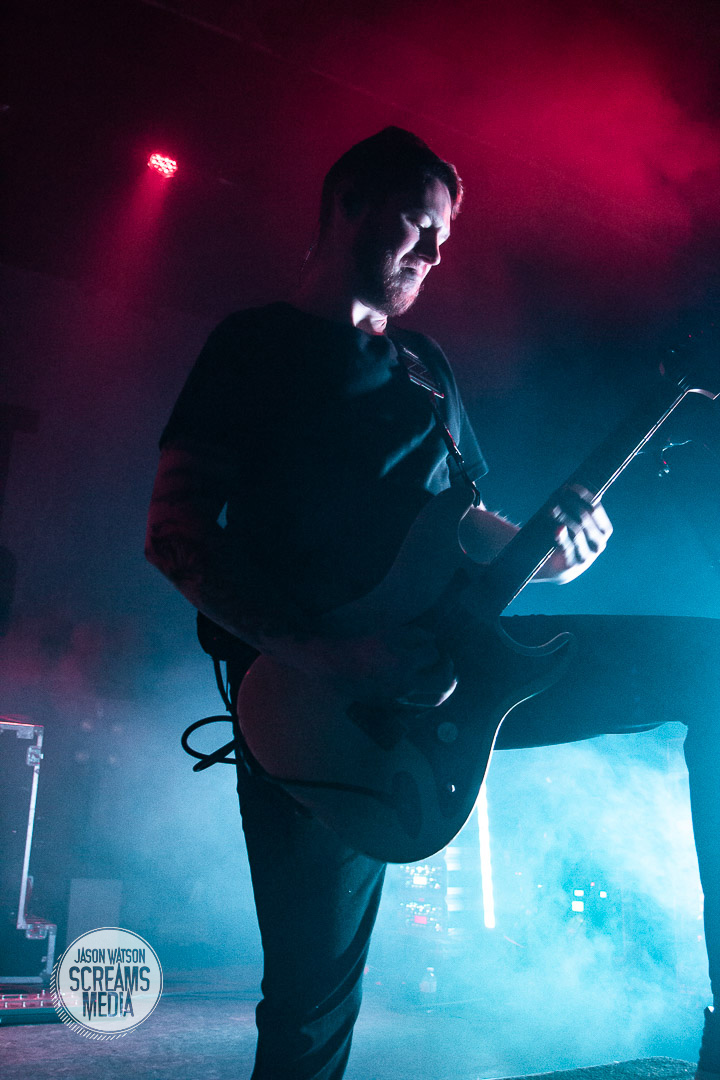 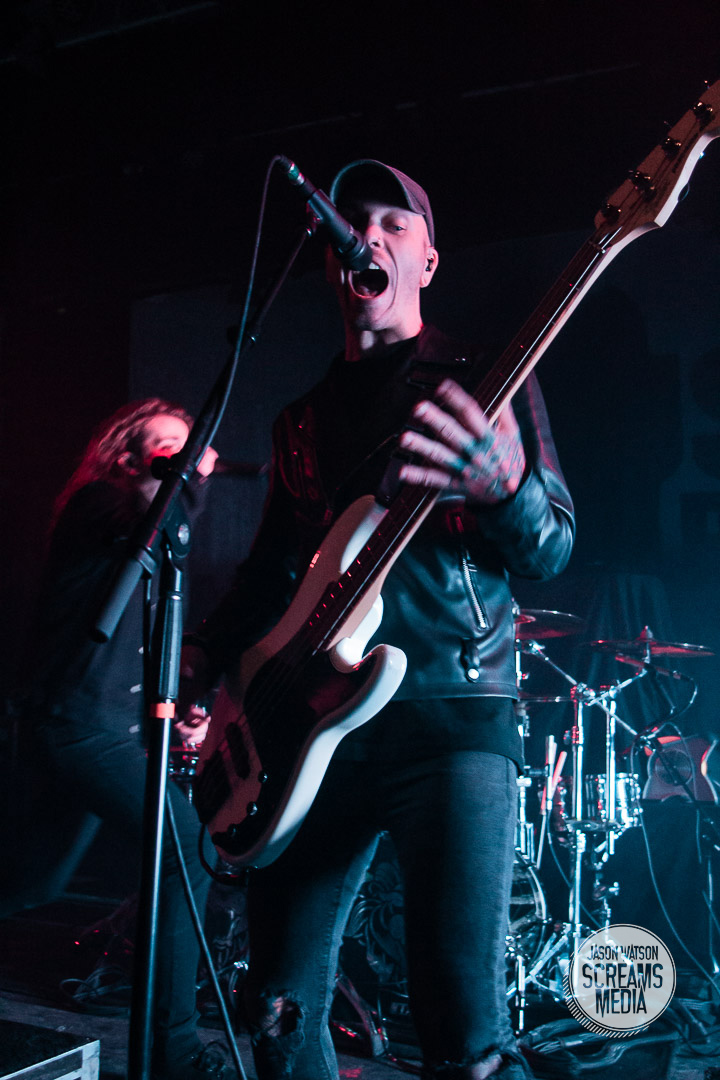 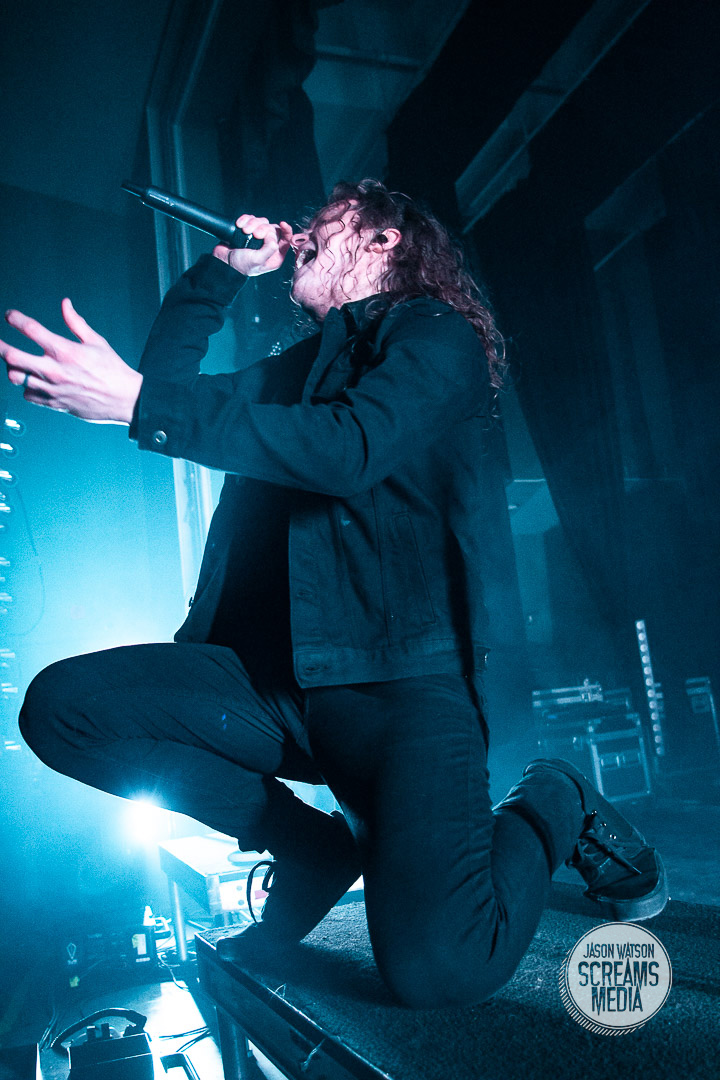 They followed that up with the first single off their third release At Heart, titled "Hey Mister." This song brought tons of crowd interaction – from clapping along to the intro, to shouting back the lyrics during the chorus. Their setlist consisted of mostly songs from their newest album, but included a throwback to their 2010 album Monuments. Hearing Relentless Chaos – the song that got me into the band many years ago – is always a highlight for me.

Even after 4 years of not seeing them live, a band like Miss May I is able to evoke as much emotion from me as they did when I first saw them. The band has a way of pulling you in when they're on stage, holding your full attention from start to finish of each song. Getting the chance to photograph their set after near 10 years of being a fan is definitely my favourite memory of this band (meeting them at a Pizza Pizza in 2015 is a close second).

Fit For A King hit the stage next, for the first time in Ottawa since 2015. This band put on an incredibly high-energy set. From the crowd in a constant mosh-pit, to the bassist jumping off the drum set, they made sure no one left bored. Kicking off with Shattered Glass from their most recent album Dark Skies, the heaviness exploded from the speakers.

They followed that song up with a few others from Dark Skies – most notably a track by the name of When Everything Means Nothing. This song was a nice break from the heaviness, proving that the band are able to bring effective clean vocals and softer melodies to the table. The break didn't last long before they kicked back in with Backbreaker, which was as heavy as it sounds.

The rest of their set consisted entirely of songs from their two most recent albums – Dark Skies and Deathgrip. Although there was no guest spot during Dead Memory, we were gifted with an appearance from Levi Benton during Stacking Bodies. During which the Fit For A King bassist lifted him onto his shoulders and started doing squats as he played. And to top off the set, Crystal Lake's Ryo Kinoshita came out to perform Tower Of Pain with the band (and dive into the crowd while doing so.)

Finally it was time for the headliner – August Burns Red. This band commands attention like no other in the genre, each member bringing their own unique brand of showmanship to the stage. Vocalist Jake Luhrs has a way of controlling a room with both his voice and his body language (almost as easily as he swings the mic around). Brent Rambler and JB Brubaker bring their shredding skills on guitar, between solos and breakdowns, their skill is unparalleled. Dustin Davidson rocks the bass and back-up vocals, adding an extra layer of heavy to the show. On the drums, Matt Greiner knows his way around the kit and shows exactly that anytime he has a pair of sticks in his hands.

They showed love to most of their discography, with a lengthy set that sounded like they put their Spotify page on shuffle. From Dangerous, to Composure, to Meddler, the early portion of the set was a great example of the band's range. They incorporated plenty of movement on-stage, with plenty of jumping around, no band member felt confined to one area (except the drummer of course).

Watching each member of the band use the room they were given to their advantage, it was easy to see just how much fun they have up there. They play off each other's energy and have a certain type of chemistry that translates to how incredible their live performance is. With many mosh-pits, crowd-surfers and a wall-of-death of two, August Burns Red showed Ottawa exactly why they're still at the top of their game.

After their lengthy 12 song set, the band made their way off stage, only to be lured back out by a chorus of encore chants. Matt Greiner was the first to return, only a silhouette in front of the large U shaped light behind him. He proceeded to shred out one of the most impressive drum solos I've witnessed in person, that had my entire body shaking throughout (but that was probably because I was about a foot away from the speakers.)

Next to return were the remaining instrumentalists. If you haven't heard their recent release of a Legend of Zelda theme song cover, make sure to check that out. They brought the elements of their much beloved Christmas albums and combined it with the video game world. As Jake made his way back out near the ending of the song, applauding his bandmates, they kicked right into The Frost. A song with plenty of heavy moments, but also allows the guitarists to show their dexterity as they tap their way up and down the fretboard.

Closing out the night with my personal favourite, the song that got me into heavy music (and left me with a broken nose in 2015) – White Washed. Even though I had my camera in hand, I could not miss being in the crowd for this. Always one of the most energetic songs of the night, being able to experience everyone shout back the lyrics will always be my favourite part of an August Burns Red show.

Now despite this being almost the exact same tour that came a few years ago, this was both a pleasant throwback and a night of fresh memories. From taking a last minute risk in applying for my first official media pass, to being able to shoot three of my favourite acts in metal, this is exactly how I wanted to start 2019.

View the full gallery here. Bands/Media/Fans please feel free to use and share any content with proper credit back to Screams Media. For images without watermarking please email jasonscreamsmedia@gmail.com for purchasing info.